From health challenges to a job that she loves: Margaret’s journey with GC Employment

Margaret Atkinson, from Newton Heath, hadn’t been in paid employment for four years. Throughout this period of unemployment, Margaret’s mental and physical health deteriorated due to personal issues and accidents.
However, towards the end of 2017, Margaret started some voluntary work with a local charity. After 12 months, her confidence and self-esteem slowly started to return.
Margaret wanted to take the next step into paid employment, and so her journey with the Growth Company began.
She was initially assigned to her learning mentor, Katie, in June 2018. Katie quickly identified that Margaret needed a great deal of support and guidance to bring her confidence and health to a level where she could consider leaving the voluntary work behind and returning to paid employment. 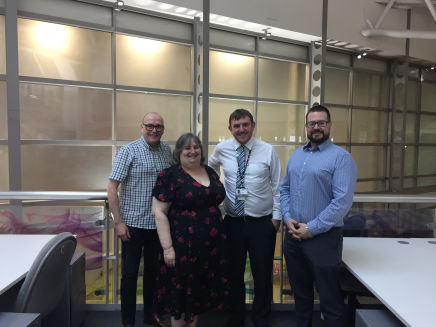 The first step was to enrol her onto Level 3 courses in Maths and English. While she was studying, Margaret experienced frequent bouts of depression and self-doubt – however Katie helped her to overcome them. By December 2018, Margaret felt ready to go back to work.

Although Margaret was initially very nervous, she was soon made to feel at ease. She and Catharine from HR GO developed a good rapport, and Margaret was offered the job. Once she was in the role, she received further support from HR GO’s on-site representative at Serco. Within two weeks, Margaret was on the phones and building good working relationships with her customer service team colleagues.

In team meetings, Margaret would always speak up for her colleagues - so when the opportunity arose to become the Viewpoint Rep, she was encouraged by Paul, her manager, to apply for the role. Paul had seen just how much people looked to Margaret for help and guidance. He was also encouraged by the fact that she thrived on this and took ownership of the role.
Paul now wants Margaret to become the Wellbeing Rep to counsel the company’s customer service agents after they receive distressing calls – and be someone who they can turn to whenever they feel like they need support.
Speaking of the help she received from us, Margaret said: “The Growth Company believed in me - they gave me support when I needed it most, and kept me going even when I wanted to give up. I am now back in a job which I feel is right for me, and I intend to stay until my retirement.”